Hymn to the Sky

That time I wrote a poem for the strangeness of solitude sky;
considered all its vast majestic blueness (*note to self: am I allowed
‘blueness’ here? Why is it majestic? Is it? Should I give up poetry?)

imagined all the things which lay beyond  (No, try…)
and contemplated worlds I’d never see (No... maybe abandon blank verse:
too much gravitas for a Monday morning? Try free verse instead? What
about becoming a bus driver/ self-help guru?)
Too easily distracted by my own thoughts,
I wandered off on flights of fancy, searching
instead, for words which might elucidate
this mood, this wistful melancholia (Why the humour, then? Also:
‘elucidate’/ ‘melancholia’? Is that such a good idea?)
There are no clouds at all, from where I sit
From where I sat, I saw no clouds at all,
but emptiness and the next-door neighbour’s bloody dog, barking, again!!!
birdsong on a breeze. (We can ‘see’ birdsong’ now, can we? Can we?)
There’s nothing idle about contemplation:
next time you see the sky, just see the sky.
A rush of something then changed my mood;
the night was past, my dreams all turned to dust sand.
Thinking about the sky, this act of looking (This is why I prefer writing in
the afternoon.)
That act of getting distracted by my phone looking… thinking… looking…
thinking…
had lifted me. The day could now begin. ; the sky had lifted me.
The day began. There were no clouds, just blue.

Peanut butter – you are my enemy!

I would blame my many over-indulgences of you
on six years of boarding-school privations,
but we both know that it wouldn’t be true.

All logic, all reason
goes out of the window when you’re around.
I must eat you
for then, and only then, will you not be there
tempting me to eat you.

Peanut butter – you are my kryptonite!
You are like heroin.
Okay, you’re not like heroin;
I can walk past you in the supermarket quite easily.
I’m not buying you, you bastard,
I say (in my head – what do you take me for?)
Remember what happened last time?
And the time before that?
And the time before that?
Me and peanut butter
and infinite regress.

All things in moderation?
Fuck that, peanut butter!
It’s just not possible, is it?
It’s never going to happen.
Really, seriously (no, not seriously, I’m joking, obviously),
what is wrong with me?

It’s only madness which makes me buy you,
that, and when my sons come to visit.
‘Oh, look, I bought two jars –
one crunchy, one smooth –
for my sons, who like peanut butter.
What a good dad am I?’

But will they see any peanut butter?
Will they fuck!

Peanut butter, you’re like a leitmotif
running through the score of my
many failed attempts to control my appetite.
More like a darkmotif,
possibly a heavymotif.

I yearn for the destruction of civilisation
which will bring with it an end to you,
O, peanut butter.

Peanut butter?
More like peanut bitter.
Sorry to end with such a weak pun,
but you really don’t deserve any
better. 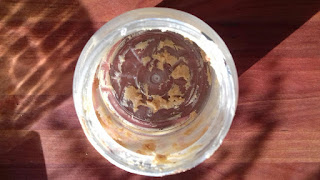 We hit some unexpected traffic:
a wretched five-way signal on a Sunday.
What would have been two minutes through the town
becomes a chance for conversation as
we sit, unmoving, in a queue.
A line of ornate barbed-wire on a wall
diverts my driver’s eye, and she exclaims,
‘A modern metal crown-of-thorns type sculpture…’
It isn’t every day my wife remarks
upon the world in lines of perfectly
constructed verse. I get my notebook out.
I write the words and tell her what I’m writing:
her unintended line of chance blank verse.
‘Shall I compare thee to a summer’s day?
Fuck off!’ she shouts. It looks far worse in print.
The Shakespeare quote was her in mock-poetic
mode; the expletive – aimed at some buffoon
driving a Merc. She goes off on a rant
about the selfishness of other drivers
and then she stops. ‘I’ve been living with you
too long,’ she says. It’s good to rail against the
stupidity of others, I reply.
It shows you’re still alive. This doesn’t work.
‘You’ve imposed your stronger personality
over the course of thirty years,’ she says.
‘I’m now pissed off at the world – how come you
don’t like ballet, or dancing...?’ I’m too busy
writing this down to think of a riposte.
This doesn’t go unnoticed. ‘Write a poem
for me: an ode for Mother’s Day; an ode
to daffodils; an ode…’ and here, she tries
obscenity. I can’t write that! I shriek
(with laughter). Now she’s started, though, this
supposed student of my misanthropy
does not stop there, and launches, with both vigour
and verve, a blast of non-stop fluent swearing –
in French! – as unexpected as it is delightful.
I didn’t teach you that, I think, and laugh
out loud (again). ‘I like it when I make
you laugh,’ she says, taking a break from swearing
in French. The traffic starts to move at last,
the moment passes, as all moments do;
we find ourselves along a different road.
Posted by Fergus at 22:21 1 comment:

The Fresh Prince of Kidderminster ****** 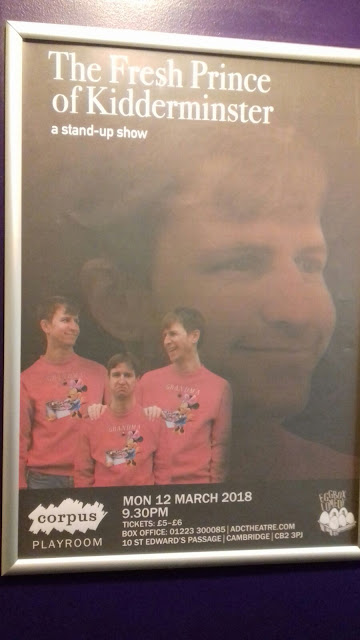 I went along to this comedy event in my capacity as reviewer (for The Observer, apparently). I have to say that it was quite exceptionally hilarious and deserves every one of its six (out of five) very authentic and impartial comedy stars. The bit where he inivited his dad on to the stage (after he heckled his own son - can you believe some people?) was, for this reviewer, a particularly vivid highlight.
Posted by Fergus at 13:23 No comments:

there's nothing funny about adoption

[as the poet believes in irony,
this is a 'found' poem]
Posted by Fergus at 00:21 No comments:

some things we lose
we can’t get back again

sometimes we find the things
we never knew we had

and sometimes
when we stare into the distance

and I see you
and you see me

and somewhere in that distance
we see our father

looking back at us
Posted by Fergus at 19:54 No comments: