Because I do not know my father’s name,
I will not search for him in any records.
I will not run my fingers down a page
of Births and shout ‘Eureka!’ when I find
his name because I have no name to find.
The Register of Marriages will stay
unopened on its shelf. Page after page
of Deaths will not be touched by trembling hands.
I will not celebrate his birth. I will
not find his grave and leave fresh flowers there.
I will not pay my last respects or say
a silent graveside prayer. If here is where
I always am, then he will always be
elsewhere: beyond my reach; beyond my grasp.
Because I will not ever find my father,
instead, I search for traces he has left;
the traces which have skipped a generation;
the traces which have landed in my sons,
all five of them. One time, when they were growing up,
I lined them up like Russian dolls, and somehow,
a minor miracle, they stood still long
enough for Gem to take a photograph:
each one a different shade of someone else;
alike, and yet not so alike, the way
that families often are. They stand forever,
caught in that moment: one, two, three, four, five;
my father’s flesh and blood; my father’s grandsons.
Which one of them, I think, looks most like him?
My five beautiful boys, who say to me,
and always did: do not look back, look forward,
at us, the healers of your saddened heart.
Although you never knew your father’s love,
you know the same cannot be said of us. 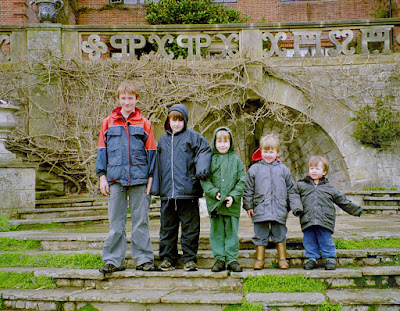 The vase I was presented with
was fake: the copy of a copy
which wasn’t even real to start with.

I dropped it on the floor and watched
it smash, its gaudy decorations
no longer offending my eye.

I swept the pieces up and threw
them in the bin, then washed the floor
to rid it of all splintered shards.

I bought myself a brand new vase
(not copied from some lousy copy)
whose decorations I could live with.

I placed it on the window sill,
filled it with pink and yellow flowers,
and got on with this act of writing.
Posted by Fergus at 15:31 No comments:

I trace the contents of my heart;
transfer them on to see-through paper.
The place where words and page collide
is bloodied like an unwrapped bandage.

Can you decipher streaked red marks
and taste the iron on the page?

The rhythm of my heart becomes
the rhythm hiding in my words:
systolic beats captured in pencil,
their pulses found in measured accents.
What movement will you find when hearing
the heartbeat’s echoes as you read?
Posted by Fergus at 16:01 2 comments:

Abandoned children are a different species:
their vanished presence means they do not breathe
life in as others do; their signatures
are not their own; elsewhere is where they spend
their lives. So much locked out, so much locked in.

Abandoned children are a foreign species:
their faces do not show in any mirrors;
the world is not reflected in their eyes.
Their smiles serve to protect them: see them, see
them not. Their hidden hearts conceal. (Conceal.)

Abandoned children find themselves as adults:
still smiling; still elsewhere. Locked out. Locked in.
The secret is to see themselves in others –
those fellow travellers with their off-course childhoods –
who understand what vanished presence means.
Posted by Fergus at 18:26 9 comments:

I do not wish to spend my time on writing
poems: the writing of my poems should
be effortless (say I). I want my poems
to land upon my notebook’s page with no
more effort than it takes to make a cup
of tea (no milk or sugar: why waste effort?).
I write this poem in blank verse. Blank verse
is second nature to me (fortch.) and takes
no effort whatsoever: string some words
along that well-worn pentametric line.
This poem’s shaping up quite nicely now
(can I say nicely in a poem – twice?)
and quickly, with a minimum of effort
(forget the content: count the lines it has).
Contrast this with the one I tried to write
this morning (and for what?): three couplets long;
completely incomplete. It took me hours.
I write the poems which I want to read,
and this takes time. I am impatient. That’s all.
Posted by Fergus at 18:22 2 comments:

Let’s break it down and hear what happens...
Rhythm, to start: a five-four beat,
played by a drummer with three left feet.

The sax joins in; hints at a tune
halfway between a wolf and the moon.
Then bass, piano, guitar: each opens

up a soundscape of seasickness.
The audience appreciate
a brave new rhythm: thirteen-eight.

Above the waves of flat-sharp notes
a piano solo barely floats,
before sinking beneath the darkness

from whence a tune tries to escape,
slapped back down by a drowning bass.
It gasps for breath then is no more

The sax brings everybody back
to somewhere near the point they started.
The full ensemble plays together

in glorious disharmony;
crash lands from thirty-thousand feet.
Silence, of sorts. Knowing applause.
Posted by Fergus at 09:56 No comments:

Today, the lead in my pencil had run dry;
it did not want to yield up any words.
This isn’t true, strictly speaking,
because here I am, seated at a table,
pencil in hand, words slowly filling up the page.
But I feel as though I’m torturing the lines into existence,
and torture, as we all know, doesn’t yield any truth,
but simply tells us what we want to hear,
until you end up with a meaningless confession.
Blocked, the title which I’ve just written ironically proclaims.
I’m playing hide and seek with words and meaning.
I’ve counted up to twenty, called,
‘Come out, come out wherever you are!’
and left it at that. I’m in no mood for searching, though.
Instead, I’m writing stream of consciousness stuff.
Unconsciousness, perhaps.
Maybe the words have been knocked out from all the torture.
They’re lying hidden, somewhere: beaten, bloodied, incapable of surfacing.
This isn’t poetry, it’s something else:
desperation, or maybe laziness.
No metre, structure, sense of direction,
just blah, blah, blah and a bit more blah.
Blah, blah, blah, blah, blah.
That’s it; that’s all I’ve got to say:
an unintended metaphor for poetry today.
Posted by Fergus at 12:19 No comments: